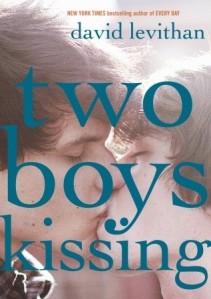 “We always underestimated our own participation in magic. That is, we thought of magic as something that existed with or without us. But that’s not true.”

How does one create a story about queer love that will appeal to readers of all sexualities, without coming off as defensive, offensive, or pushy? Write about magic. David Levithan has created a beautiful novel that should appeal to anyone who loves love. How did he do it?

Two Boys Kissing is popular because of its literary excellence and its sincere subject matter. But it’s important because the gay community needs to be represented in a strong positive way. The most successful way to do that? Integrate a call for gay rights and the portrayal of gay love into popular culture in beautiful, unignorable ways. Two Boys Kissing isn’t just about gay rights. It’s about the magic of opening yourself to love. It’s about sincerity and curiosity and growth. It’s a story that anyone can relate to.

What other YA literature featuring gay love do you recommend?