It’s been a crazy month, filled with travel, adventures, and of course new music, shows, and books. One of my favourite things about librarianship is the spirit of curiosity. All the librarians (and future librarians) I know are always on the look out for new media to consume and new adventures to experience; and we’re always sharing with each other! I officially finished my MLIS on August 8th, and since then I have been putting every moment to good use – exploring, experimenting, and reading like crazy. Here’s some of what I’ve experienced: 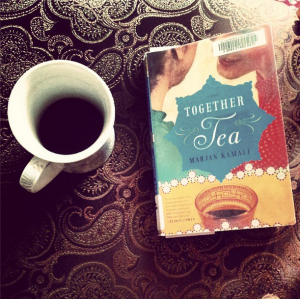 I have been learning so much about the immigrant experience and Iran history/culture from Together Tea by Marjan Kamali. This story jumps between 1996 New York and 1970s Tehran during the Islamic Revolution, following the story of a mother and daughter who have a deep, yet quirky relationship. It’s got wisps of romance and travel literature, and lots of culture.  Highly recommend for anyone into character-driven multicultural fiction. Bonus if you also happen to love chai tea and scintillating descriptions of food. Check out my post about the importance of accurate multicultural fiction for more on creating meaningful community space.

I’ve also jumped back on the Neil Gaiman train this month. I can’t get enough of Sandman, thank goodness there are so many volumes! Sandman is a literary gem, beautifully engrossing on the surface, but rich with intricate analysis for those who are willing to dig deeper. I don’t want to give too much away, but Neil Gaiman sure loves foil characters.

I’ve been listening to Gaiman’s American Gods on Audible this month as well – full cast version. I can definitely see the appeal of this type of media. It’s like listening to a movie! Only your imagination gets to take control of the images. Neil Gaiman’s writing lends itself very well to the audiobook format, because of the many characters and dialogue, and the imaginatively described locations. Definitely recommend giving this a try if you’re interested in exploring audiobooks.

I spent 10 days this month on a phenomenal trip to St Andrews, New Brunswick. I love the east coast. I love the culture, the friendly locals, the art, the whales, the freshest fish, and the hiking. I painted by the sea, went to the bustling Wharf Market, toured William Van Horne’s former house on Minister’s Island, caught 12 fish while deep sea fishing, went whale watching, drove up Mount Washington, ate way too many local blueberries, and explored Irving Nature Park and Acadia National Park. The perfect celebration to mark the end of my Master’s degree.

What I Listened To

In July I had the amazing opportunity to attend the Toronto Urban Roots Festival at Fort York. I got to see some amazing performances: Beirut, Local Natives, Violent Femmes, Hey Rosetta!, The Strumbellas, Sam Roberts, and one of my new favourites: July Talk.

July Talk is an indie rock band from Toronto featuring two lead singers: Peter Dreimanis has the raspiest, deepest voice you could imagine, and Leah Fay has the sweetest, clearest one. Their opposite voices give their songs a unique quality – almost like a vocal tug of war where everyone wins. Together they are strange, funky, and one of the funnest performances I’ve ever been to. Stream their first album for free on Grooveshark.

Sam Roberts was also a super fun show. His new album Lo-Fantasy, released February 2014, is a lot synthier and dancier than his older albums, and it works for me!

I had an amazing day geocaching around Niagara, complete with a lakeside sushi picnic. Geocaching is an awesome, easy way to explore your community, connect with other explorers, and get some fresh air exercise. The caches I found were well-used. One of them has been active since 2009, and sits at the entrance to one of my favourite childhood parks. You probably pass by geocaches every day without realizing it. Download the free geocaching app from the official site here, and get searching!

Orphan Black is a Canadian sci-fi show about genetic enhancements, ethics, and complicated relationships. Sarah Manning watches a woman who looks exactly like her kill herself in the subway, and soon becomes deeply involved in an action-packed mystery. Sarah is one of many clones, some of which have began dying due to a genetic disease, others who are being hunted, and all of which are being monitored by someone who seems to be their “creator.” Canadian Tatiana Maslany is a phenomenal actress, who convincingly portrays several clone characters, often in the same scene, but always with diverse personalities. Her acting alone makes this show worthwhile.

This month has been absolutely full of excitement for me, and packed full of new discoveries. What did you love this month? For more life-enhancing recommendations, check out the rest of my What I Loved series.