The force is strong with this one!

Are you as excited as we are for the new Star Wars movie, The Force Awakens? If you like Star Wars, you won’t want to miss the Teen Star Wars Party at Clemens Mill!

We’ll make lightsabers and Star Wars buttons, play a hilarious Star Wars game, watch a few of the funniest Star Wars spoofs out there, and most importantly…compete for title of Ultimate Star Wars Trivia Champion. You could win movie tickets and other awesome Star Wars prizes.

Oh, and did we mention? There will be free food.

When? Wednesday December 9th from 6-8pm

Why? To celebrate the release of Star Wars Episode 7: The Force Awakens of course! And to relish in nerdery and make like-minded friends. 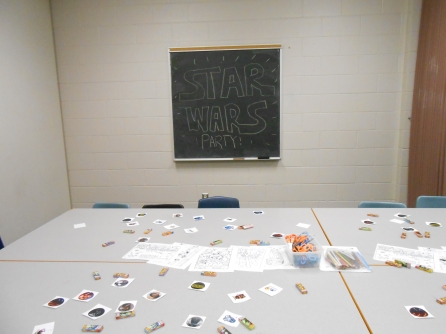 Low key welcoming activities: (10 mins, as they trickle in) 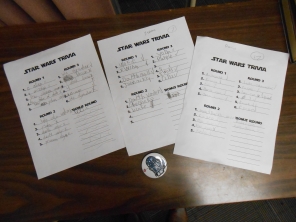 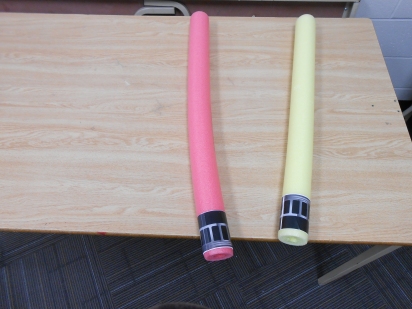 I created little card-stock “invitations” with information about the party and takeaway buttons. I spread 14 around the library the week before the party – all were gone within 2 days. Buttons are magical!

Resources? (you may need to download this free Star Wars font to enjoy these fully)

Day of, I realized that attendance would be low, so I decided to open the event up to older children as well. I went around the library in full Anakin Skywalker wear, telling families with older children about the party. In the end I had 11 attendees – 4 were young teens, and the rest were children between the ages of 8 and 12 and a couple parents. I’m really glad I did – the younger participants were very enthusiastic and happy to be there.

One 8 year-old said “I didn’t think people like me would be allowed at this party!!” while dancing around with an impressive double sided saber.

I decided to run the program in a teen-directed way. Rather than have a strict schedule and timeline, I had many activities ready to go and we went with whatever the group wanted. For example, at the beginning of the event I had 3 girls – two 13-year-olds and one 8 year-old. After button making, we played Telephone Pictionary. They loved it and begged for us to play it again. So we did.

Eventually 2 guys arrived – one was a huge Star Wars fan so I knew we had to move on to Trivia eventually. I showed them Saber Duels while the girls finished Telephone Pictionary. In a few minutes we started Star Wars Trivia (a huge highlight). After that I put on the YouTube Film Festival. Some of us made balloon sabers, while others had saber duels. A couple new attendees joined at this point and jumped right into buttons and saber making.

This flexible approach worked well since everyone arrived at different times throughout the night. The last 4 attendees wanted to stay and watch YouTube and have Saber Duels forever!

What activities would you have at a Teen Star Wars Party?