I ran this Whose Line is it Anyway inspired program for all ages in the summer. Although attendance was fairly low (10 kids, mainly tweens), I have since received many requests from kids to do more drama programs. Seems to me that with fewer art, music, and drama classes being run in schools, the library has an opportunity to fill a community gap.

I have made all my resources available at the end of the post. Here are the descriptions of each game!

One person sits in a chair, everyone else gets “on stage” and acts out the word all at once. Flash cards are used to show the group what to act out.

Volunteers needed: 6 (1 host and 5 attendees who get a secret identity from an envelope)
Time per round: 3 minutes
Instructions: The Host begins the scene “inside” their house, waiting for guests. The attendees, who each have a secret identity, ring the doorbell and enter one by one. During the scene they must act like their character without totally giving it away. They interact with each other and the host. At the end of the 3 minutes the Host must guess each identity. 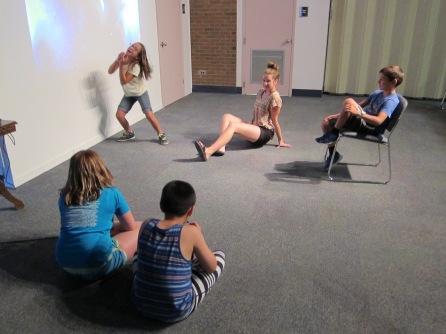 Volunteers needed: 4 (2 actors, 2 offstage sound effect people)
Time per round: 2 minutes
Instructions: The setting is indicated by images on the PowerPoint, and an audience suggestion is taken for a story prompt. Two actors stand on stage and act out a scene based on the prompt and setting. Two offstage actors have microphones, and do the sound effects for the actors. Every 2 minutes, pause the scene, change the actors, and change the scene.

Break into teams of 3-7.
Each have a story prompt and a prop.
Have 3 minutes to brainstorm a short skit and 5 minutes to perform for everyone else.

1 prop is presented at a time. Everyone is asked to imagine the prop as a different, funnier item. Volunteers from the audience come up and act out what they’ve imagined the prop to be (5-10 second skits)