I have been on a roll lately with YA Lit! Since I order all the books for the children’s and teen sections, I’m always looking forward to the next great thing, and this month I found a bunch. Check these out if you love YA, and be ready to talk about them if you work with teens. 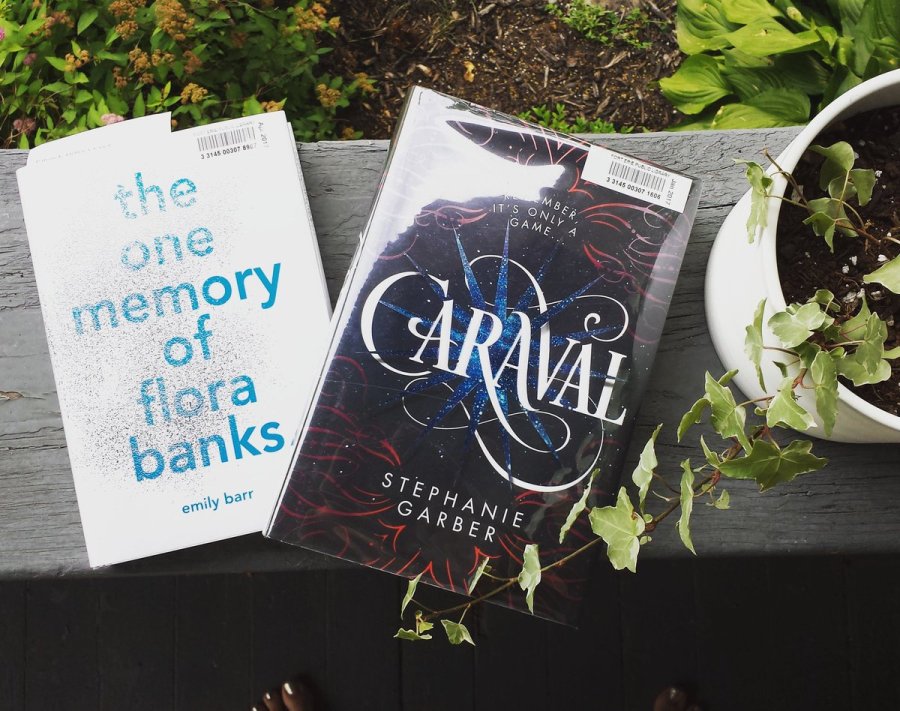 The One Memory of Flora Banks by Emily Barr – Flora Banks is 16 year old girl with anterograde amnesia – she can’t create new memories. Every couple hours her brain resets itself, and suddenly she’s a lost 10 year old, reading the notes on her arms, unsure of what’s going on. But one day she forms her first memory in years: a kiss she shared with her best friend’s boyfriend. Secrets are kept, danger is near, and Flora will stop at nothing to get to the bottom of it.  It’s tender, twisty, exciting, and fresh. I would recommend this book to anyone who is looking for a light psychological thriller, but also teens who enjoy love stories or adventure stories. A readalike for We Were Liars by E. Lockhart, Before I Go To Sleep by S J Watson, and Beware that Girl by Teresa Toten.

Caraval by Stephanie Garber – This is a YA fantasy that reads more like a whimsical romance. Scarlett’s life is bleak and colourless. She lives in a desperately hot, dry place and is completely under the control of her violent and cruel father. Ever since she was a child, she’s dreamed of escaping to Caraval – a magical travelling show that invites guests to compete for a wish. There are fortune tellers, portals, dresses that change with your mood, and countless impossibilities. On the eve of her arranged marriage, Scarlett and her sister Tella get to go. But when Tella goes missing and becomes part of the game, Scarlett’s Caraval experience becomes more desperate than dreamy. The scenes are beautifully painted, and the whole mysterious magical tone reminded me of a Studio Ghibli movie. Makes sense that the screen rights have already been snatched up by the producer of Divergent. One of the things that I loved most was the subtle inclusion of the main character’s synesthesia – she sees colours tied to emotion. 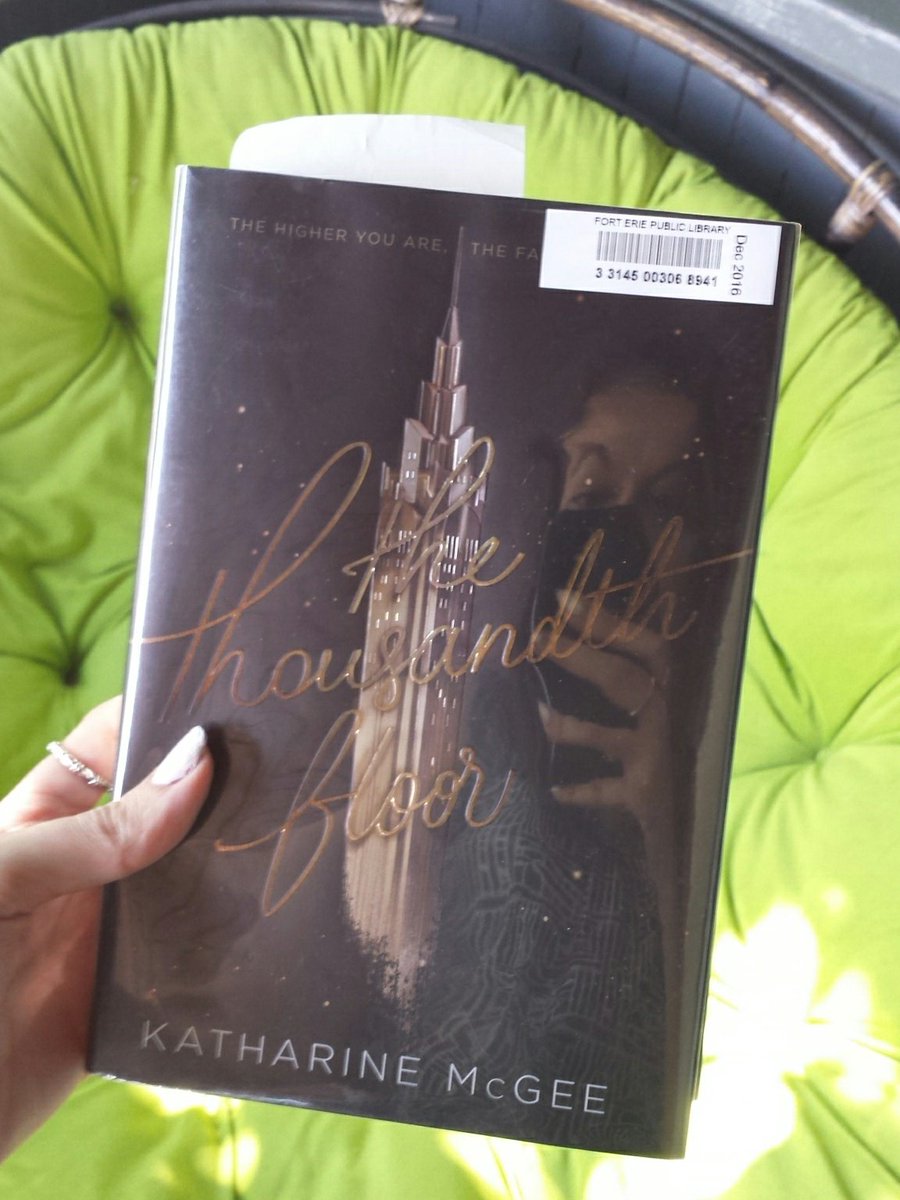 The Thousandth Floor by Katharine Mcgee – Speculative futuristic fiction meets the glamour of Gossip Girl in this gripping debut novel. New York City has been mostly replaced by a 1000 floor high tower housing millions of people in the year 2118. Chapters cycle through different teens – including one who lives on the very top floor. I love the glimpses into the way teens use technology in the future (they have contacts instead of phones, completely immersive virtual reality, and machines that let them program their dreams) and the comparison between lower level inhabitants and the “highliers”. The characters are both deeply loveable and hateable, and the secrets had me flying through pages. Can’t wait for These Dazzling Heights, coming out soon! 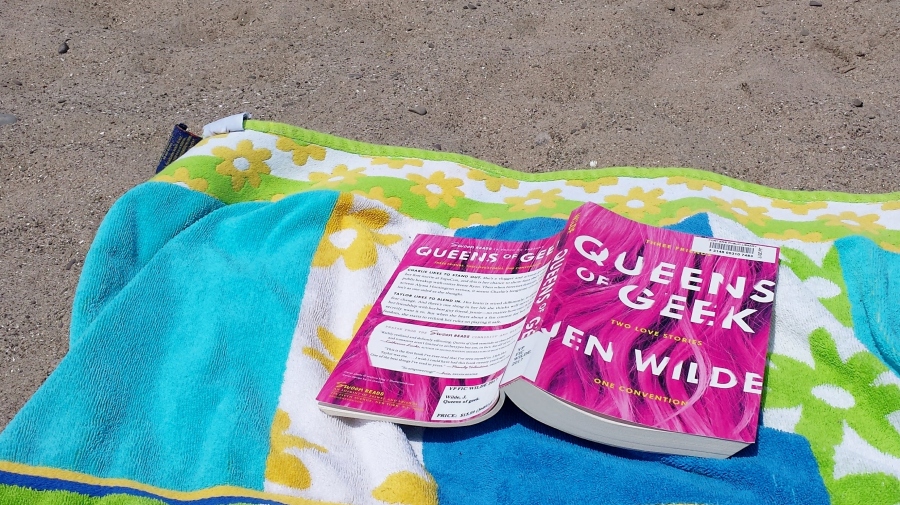 Queens of Geek by Jen Wilde- Three best friends from Australia go on a trip of a lifetime – to SupaCon in the States! Charlie is a Chinese-Australian Youtube Star and emerging actress who’s still reeling a bit from her recent break up with her co-star. Taylor is a socially anxious super-fan of Queen of the Firestone, wearing a flawless cosplay, and secretly in love with her best friend…Jamie. He’s there too, in all his comic book geek glory. It’s a fun read, full of diverse characters that are so rarely represented well in fiction: including an openly bi-sexual romantic lead and two characters on the autism spectrum. The setting of a Con is unique, and the atmosphere is perfectly captured. Plus look at the gorgeous cover!

Holding Up the Universe by Jennifer Niven – Libby, formerly known as “America’s Fattest Teen,” is headed back to school for the first time in years. Jesse may seem like the coolest guy in school, but he’s a secret sufferer of prosopagnosia – the inability to recognize or remember faces. This is their unlikely love story. There are hilarious moments and tragic moments, and as a reader, it’s hard not to fall in love with Libby yourself.  Very well written, with well painted unique characters.

What else I read:

What awesome new YA novels can you not stop talking about?

One thought on “What I Loved #19 New YA edition: Caraval, The Thousandth Floor, Queens of Geek, The One Memory of Flora Banks, Holding Up the Universe”

Karissa is a Children's and Teen Services librarian at a public library in Ontario with a soft spot for crockpots, e.e. cummings, Canadian indie music, comics, flash mobs, and people who bring her coffee.

I'm in love ❤ My library hosts therapy dogs regularly for a program where kids read to dogs. It's amazing to see shy and reluctant readers gain confidence this way. A truly non-judgemental reading buddy! I always feel lucky if I get to be there on a Therapy Tails day. Today I got to meet the SWEETEST little mutt. Maybe we had a special bond. Or maybe I just loved her because she kind of looks like my dog. Who knows! 🤷‍♀️ Does you library run a therapy tails program? @therapytailsontario #therapytails #therapydogs #readingbuddies #librarylife #librariansofinstagram #canadianlibrarian #childrenslibrarian #librarian #publiclibrary #libraryprograms #libraryprogramideas
Can you guess what my storytime theme is today 🤣 Today I'm going to start a new little initiative where I add a quick 10 second "Literacy Tip" in the middle of storytime. Children's Librarians are always mentioning these tips organically throughout events, and I want to see if making them more official works or not. #librarylife #librariansofinstagram #childrenslibrarian #librarian #storytime #penguin #penguinslovecolors #penguincraft #earlyliteracy #picturebook #canadianlibrarian
To me, there's nothing nearly as gorgeous as a soft set of bright white sheets beside an open window. Add in a poetic novel, an afternoon with no plans, and a fluffy reading buddy...and you've got it made. #onearthwerebrieflygorgeous #oceanvuong #bookstagram #librariansofinstagram #canadianlibrarian #bookphoto #booksinbed #bookblogger #aesthetic #bookaesthetic #stcatharinesblogger #bookreviewer #literaryfiction
Sometimes people ask me how I find time to read so many books. The answer really is some combination of: I read books that I can put down, and I bring books with me everywhere! Here are my picks for my hair appointment today (with my signature lipstick stained coffee cup 🤣). #librarylife #librariansofinstagram #canadianlibrarian #jvn #oceanvuong #overthetop @jvn
🚨🐶NEW BLOG POST🐶🚨 Dog Man Mania was as silly and exciting as you would imagine! We wore tattoos, drew comics, did Bingo, did my Which Dog Man Character Are You personality quiz, won prizes, and ate "kibble!" Get the resources, and links to all the other amazing librarians who have run similar events, at ontarianlibrarian.com 💗🙌 #dogman #davpilkey #lilpetey #librarylife #librariansofinstagram #canadianlibrarian #childrenslibrarian #libraryprograms
🙌🎉NEW BLOG POST🎉🙌 My new role includes a ton of display design, so prepare yourselves for a slew of new ideas. Check out the blog for resources (including v important font choices) to make a new years bulletin board display and book bin display. Bonus commentary on how to make sure your new years displays don't perpetrate harmful messaging to your community. #newyearnewbooks #newyearnewgoals #librarydisplays #greatlibrarydisplays #librarydisplayideas #display #displayideas #bulletinboard #bookbin #librariansofinstagram #librarianblogger #newblogpost