The Pokemon hype is far from over, and libraries have a wonderful opportunity to draw kids in! Pop culture themed “party” events are a perfect high appeal way to draw crowds into your space, and shift the public’s perception of a library. I’ve structured mine to include 2 or 3 craft stations, 2 or 3 activity stations, a snack table, and a big trivia challenge at the end. The Pokemon Party was one of my biggest events yet, with 77 attendees! I made sure that everyone could participate equally, whether or not they had a smartphone. Here’s what I did:

This is an extremely simple and inexpensive, but much loved craft! I covered a table with taped down paper (to prevent permanent markings), added an assortment of coloured Sharpies, and 50 Styrofoam balls of different sizes. I also printed out a diagram of different Pokeballs, similar to this one:

Kids loved colouring on the Styrofoam balls, and learning about the different designs. 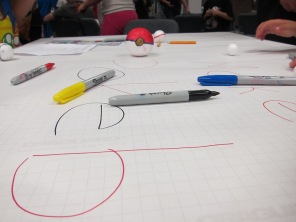 Of course, if you give 50 kids a bunch of round shaped objects, they are going to throw them occasionally. Thankfully, Styrofoam doesn’t go very far or very fast!

I created a mini Pokehunt that could be completed in the party room. It could also be repurposed inside the library, although it is a bit challenging! Kids were given sheets of paper with 10 spaces, with the first letter filled in. 10 Pokemon were hidden around the room. They had to find and name each Pokemon for a chance to win 3D Printed figurines.

As opposed to the previous Pokemon Scavenger Hunt in the Library, this activity is a mix of trivia and searching. I knew there were some Pokemon experts coming to this party, so I included a few obscure Pokemon to keep things challenging. Once completed, kids submitted their sheets to a jar for a draw. 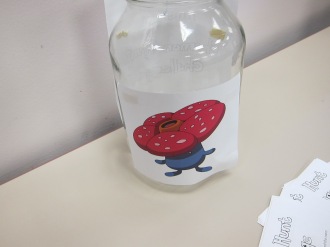 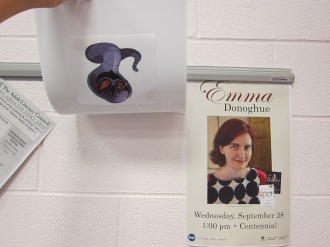 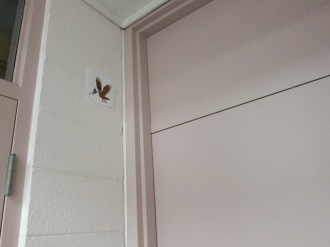 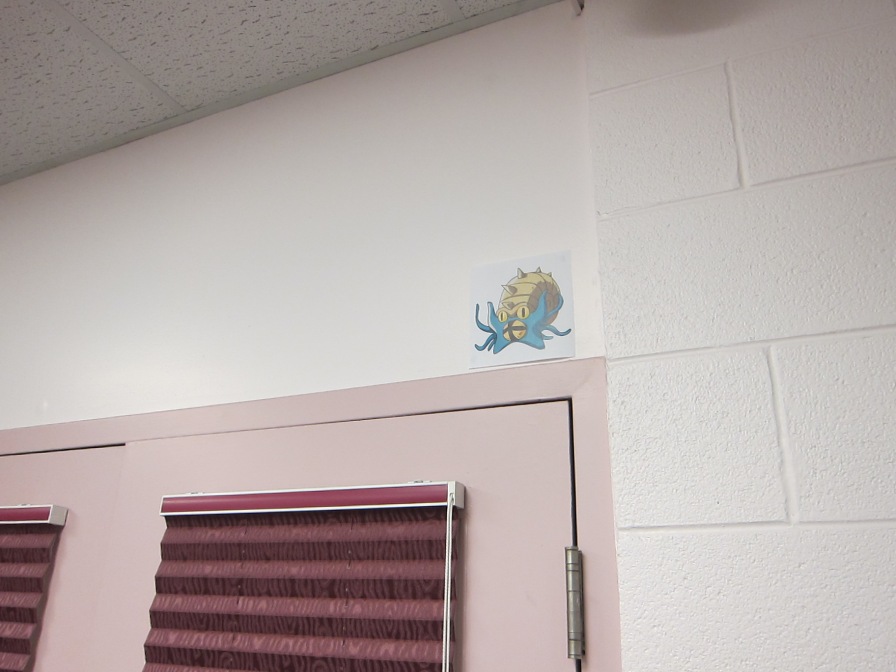 The answers for the names of the Pokemon are:

This was the main event. Half way through the party I turned up a microphone, projected the Trivia onto the wall, and gathered approximately 30 of the Pokemon Experts to the trivia section. Each got a Trivia Fill In Sheet and a pencil. After each round they traded with a buddy and scored the answers.

Even though I tried to make the trivia difficult, 6 of the 30 contestants actually scored PERFECT. We had a tie breaking question (based on 2nd gen Pokemon) to determine the winners of the Pokemon Stuffies and plastic figures. The Trivia took about 45 minutes to get through, and was the highlight of the evening.

I also included the ever popular Button Maker with some Pokemon themed buttons: 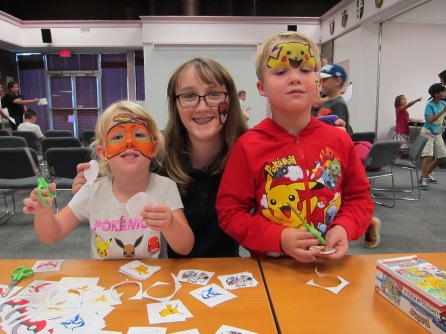 We had a Cubee making station with these resources: Pikachu Cubee and Pokeball Cubee. I had a volunteer help with this table – 50 Cubees were made!

Of course it’s not a party without snacks. I kept it simple with lolipops and popcorn. I’d love to hear any Pokemon Themed Snacks that other libraries have used!

We had our 3D Printer whirring away printing figures:

And finally, I had a Pokemon Puzzle at one table:

Overall, a super fun time! What activities has your library done at a Pokemon Party?

6 thoughts on “Pokemon Party in the Library”