What’s the only thing better than normal board games? Giant board games! I have seen many inventive and huge versions of games in libraries, so I decided to make my own. And it’s super easy. 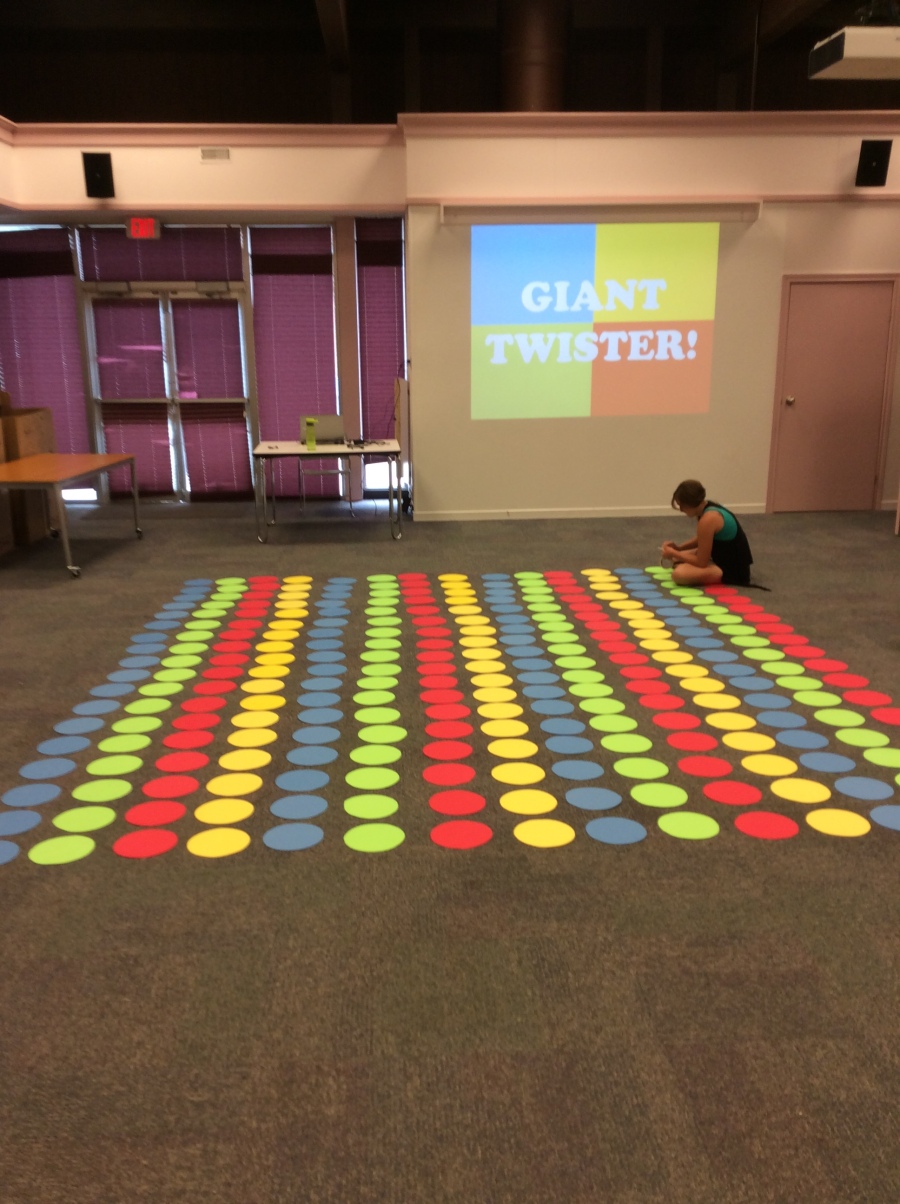 Giant Twister is just like normal twister, except instead of laying the board on a portion of  the ground you cover the WHOLE ground with coloured circles. And instead of using a spinner to  direct their moves, you use a PowerPoint (which gives you a lot of creative freedom.)

I recommend taping each dot to the ground, although that takes a lot of extra time, and makes storing them after one use a bit trickier. 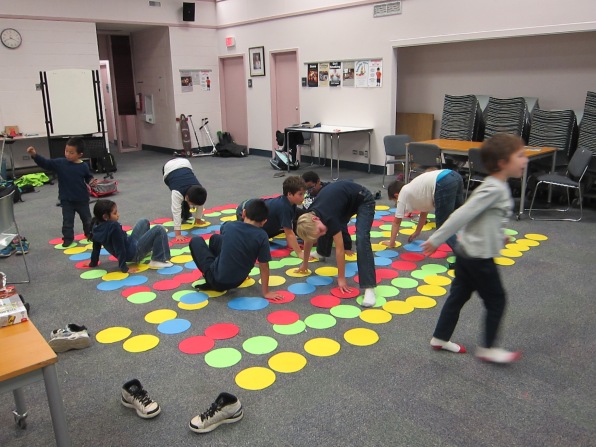 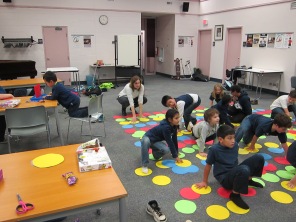 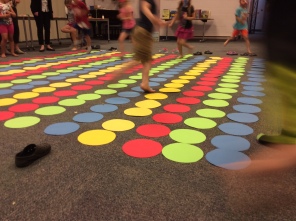 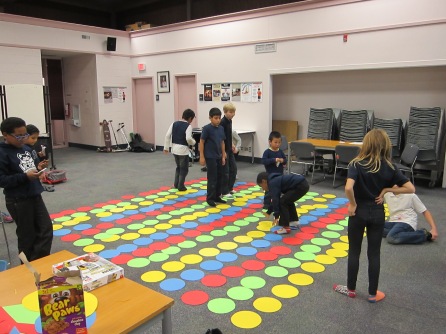 I arrange the dots in colour rows, in an even pattern, but you could mix it up with random placement or psychedelic pattern.

2 thoughts on “Giant Twister in the Library!”

Karissa is a Children's and Teen Services librarian at a public library in Ontario with a soft spot for crockpots, e.e. cummings, Canadian indie music, comics, flash mobs, and people who bring her coffee.

Change is on the way. We are having a lot of fun switching things up in our new house. Besides painting a couple blue accent walls, we're planning a simple mural for the entryway, and new colours for the upstairs landing and our bedroom! And who knows what we'll do with the guest room... Oh and we are going to paint our outdoor furniture! 💪🙌✌
I have been savoring this book for weeks, and I really love it. The world building is so imaginative, fun, and well done. And I love every character. Even the demons. #librarylife #librariansofinstagram #canadianlibrarian #thelibraryoftheunwritten #bookblogger #bookstagram #bookstagrammer #fantasyfiction #fantasybook #worldbuilding #bookrec #bookrecommendation
In Virtual Circle Time, we sing, do an activity, and make a craft. My goal is to hook their attention and get them verbally responding to the video like they would in an in-person storytime. Bonus blooper that did not make it into the final cut 🤣 What are you doing in your pre-recorded storytimes to keep kids engaged? I'd love to hear! DM me and I'll send you a link to the full videos ❤ #librarylife #librariansofinstagram #childrenslibrarian #librariansofcanada #canadianlibrarian #canadianblogger #librarian #librarianblogger #virtualstorytime #virtualcircletime #teachersofinstagram #kindergardenteachersofinstagram #slipperyfish
Anyone else decide that it was incredibly important to move your espresso machine into your home office? No? Just me? 🤣🤣🤣☕☕☕☕☕☕☕☕☕✌ #librarylife #librariansofinstagram #canadianlibrarian #childrenslibrarian #espresso #homeoffice #wfh #workfromhome #librarianing #coffee
Pretty cool to move into our new house and find this particular magazine waiting for me! I'm honoured to have an article in the May issue of @sljournal, all about best practices for virtual circle times. Shoutout to @librarianmsg for being my contributor bio neighbour! Her article on virtual book clubs is full of great tips 🙌 #librarylife #librariansofinstagram #canadianlibrarian #childrenslibrarian #virtualstorytime #schoollibraryjournal #virtualcircletime #professionaldevelopment
Out with the old, in with the new! The first half of our move into our first house is complete. It's a strange time to be moving, but we are getting through it (and having a little bit of fun too 😁)